Christians should be united to battle Global persecution 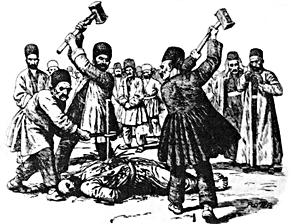 There is no denying the fact that, Christianity is one of the most persecuted religions in the world. The history of persecution dates back to the early Church and the subsequent centuries are reddened and riddled with the blood of Christian martyrs.  However, there are more Christians killed in 20th century than any other centuries in the past. From Russian Orthodox priests to cultural revolutions in China or countless killings of  believers in Rwanda in 1990s are the grim examples of the endless persecution in the 2oth century.

According to a report around 105,000 Christians die every year because of their faith. The interfaith conference which took place in Hungry last year revealed that in every 5 minutes a Christian is killed somewhere in world exclusive of any civil wars but mere because of  Christian faith.

There is hardly any day without the news of Christian/s being killed somewhere in our world. The 21st century did not bring any change in the lives of Christians however, things have gone more difficult for Christians everywhere in the world the obvious marginalization of Christianity in the sad truth of our times.

Christians are being attacked, violated, discriminated, prejudiced, killed, bombed and persecuted almost every day. On Wednesday last week, around 100 Christian people were massacred in Syria – the brutal killing is reportedly to have links with the army of President of Syria, Bashar-al-Assad.

The so called freedom of expression, religion and conscious is merely a facade. Even in the West, Christians are being dragged to courts and expelled from their jobs on a regular basis. The time is not far off when they will even be more hurdles into the expression of Christian Faith.

The escalating misuse of blasphemy laws in Muslims countries like, Pakistan, Malaysia, Iran and Egypt are few to name where Christians are being subject to ceaseless violence and persecution. The evil axis of persecution never ends for Christians living in such countries. The justice for these minorities is a far-fetched idea until a good governance comes which works within the limits of true democracy to safeguards the lives of people who are minorities.

How is Christianity prepared to face these challenges lurking in our futures?

In my opinion, Christians are burying their heads in the sand. They are hoping for some miracle to occur itself without moving a leg or limb.

Whilst I understand there are scores of Christian organizations who have been working tirelessly to help the persecuted Church in the restricted Nations and to ensure that justice is done.There is more than meets the eyes.

How about defending Christianity in our neighborhoods?

Christians like Celestina Mba, a Baptist a care worker lost her legal battle in England after demanding a holiday on Sunday for religious observance. The other three Christians, Shirely Chaplin, Gary Mcfarlane, and Lillian Ladele who recently lost their battle in European Courts of Human Rights for their Christians beliefs are yet another injury to Christian west.

How many Churches and Christian organization have stepped forward to stand in solidarity with these persecuted Christians or made their pain “our pain” and helped them in any shape or form?

However there are too much debates about the sexism in the Western Church- an ongoing debate in the Church of England  than helping the broader, universal Church which is torn apart and battling with persecution to sustain in their struggle of faith in life and death.

We need to take stewardship to voice the vice.

The trouble, which I see is that many Christians do not bother about it. They have turned lukewarm. They are neither cold nor hot. Careless Christianity?

The division within the Global Church is yet another problem Christianity has to mend. The Church has to take stance and initiate to bring a change.

The unity in the Church is the foremost thing. The more we think about it the greater is the need for the Church to bridge their theological gaps and learn to come together in unity, commonality, and in manifestation of Christian spirit to make difference to the Christianity of 21st century which is under the threat.

Sadly, the idea of Global Christianity is a rare scene. The countless denominations have widened the chasm which now is haunting millions of Christians across the world while Satan is having a good laugh at us.

The need of the hour is that Christian leadership, Churches, Organization, Christian Human rights Activists and Christian agencies to come together to defend the Christian faith from all the sores which Church is going through in our modern time.

The sores are curable only if we have a time, care, and thought to deal with it. However, a sore can turn out to be a cancer if we are careless and thoughtless bunch of people who are busy doing what we want to do.

Think Globally. We need to realize and feel the pain of those Christians who are or have become the victim of persecution, discrimination and marginalization in their countries. Their sores are our sores, their pain is our pain. Their life is our life. Only then we can make a difference when we are able to defend the cause of countless Christians who gave their lives to defend their Christian faith.

Do we have any satisfying answers for them ?

Shahid Khan was born in Pakistan and holds a degree in English Literature and sociology. He writes profusely on Christian themes and social issues. He lives in the United Kingdom.

1 Response to Christians should be united to battle Global persecution